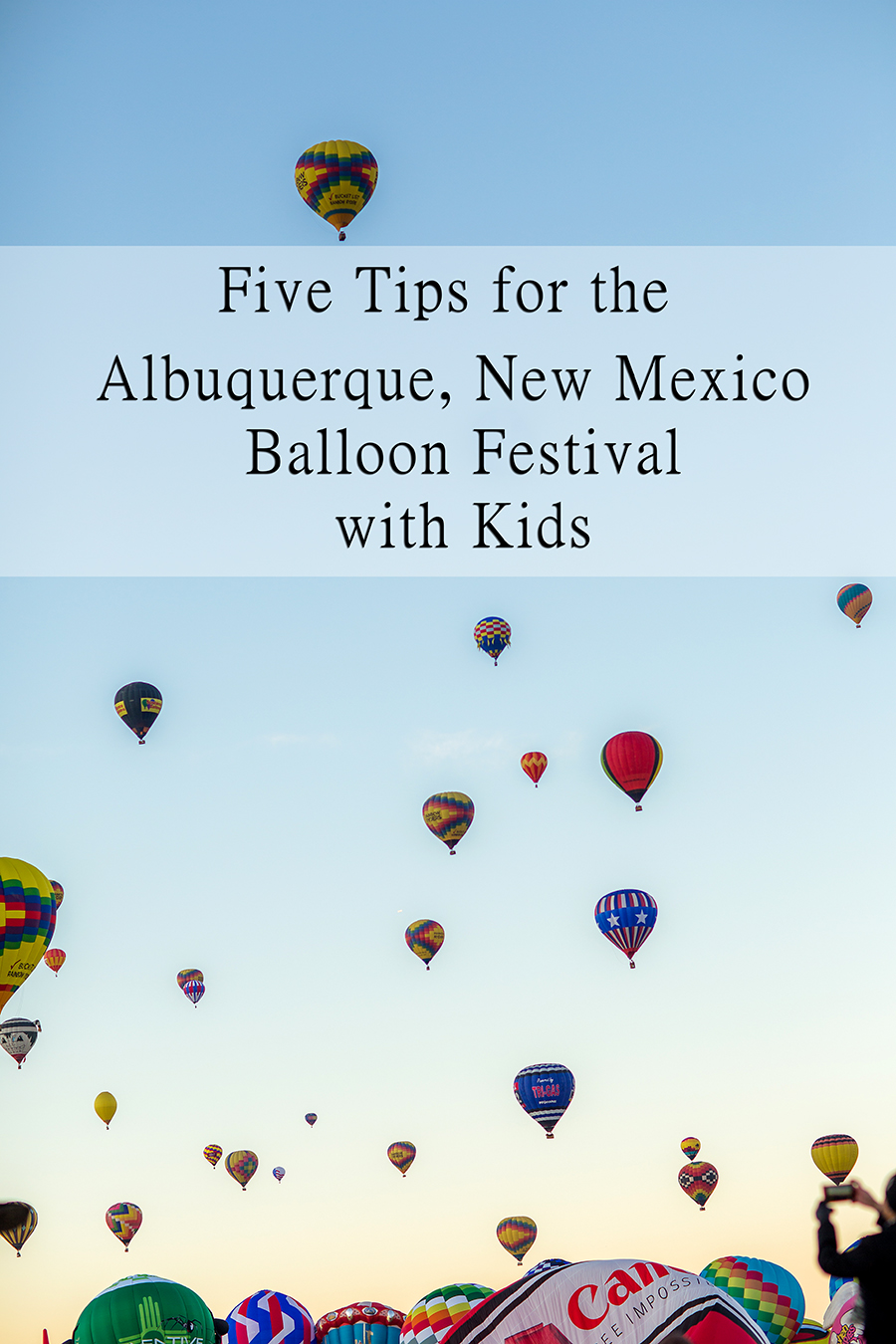 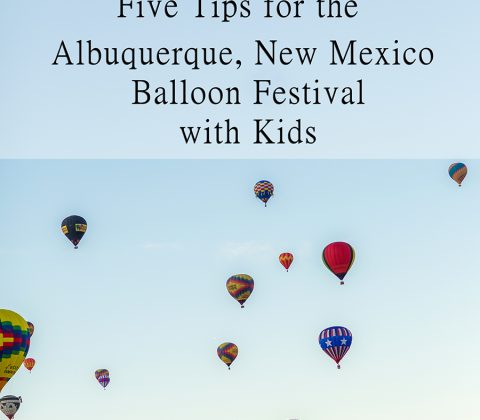 The Hot Air Balloon Festival in Albuquerque was definitely one of our trickier trips. Matt wasn’t able to take time off during the week of the festival. So we had to get creative on how we would do the New Mexico trip.

This reminded me of our first Christmas we were married. I had to work at the hospital Christmas Day. We were living in Utah at the time. Matt flew from Salt Lake City to Long Beach on Christmas morning (after I left for work) and then flew back on the same day and he arrived home before I got home from work. He got to spend Christmas Day with his family. Christmas night we were able to have our own little Christmas and I didn’t even realize he was gone. That was nice that the flights worked out where he could fly to California and back in the same day.

Anyways, so back to our Albuquerque trip. The kids and I drove to Albuquerque on a Friday October 11th. Matt went to work on Friday and then caught a flight from Phoenix to Albuquerque that night. He was supposed to get in at 11pm and then we were going to have to wake up at 3:45am the next day to see the Hot Air Balloons take off. He was then going to drive back with us to Phoenix on Sunday. My kids travel pretty well. Here are some tips on how to make the festival more enjoyable.

Five Tips for the Hot Air Balloon Festival with Kids

Why did I want to go to the Balloon Festival?

The Albuquerque New Mexico Hot Air Balloon Festival was on the top of my list. Apparently it’s one of the most photographed events in the world. I began researching the different photography spots and vantage points I could possibly take for these balloons. But this trip was one that had a series of obstacles.

What other obstacles did we experience on this trip?

I think the Hot Air Balloon Festival is one of the biggest event’s in Albuquerque of the year so the prices for lodging at this time of the year are expensive. We decided to stay at the Holiday Inn Express. I felt like we did an out of the box way to travel. The kids and I drove up on a Friday with the plan to drive back to Phoenix on the Sunday. I was nervous about not allowing enough days at the festival- what if we didn’t get to see the balloons on Saturday morning or were too tired to watch the nighttime events on Saturday night after being up so early on Saturday. All legitimate fears and risks that we took. If the kids and I came on Thursday and saw the balloon events on Friday morning – I would have get the kids ready by myself and pay for another night at a hotel. So, we decided to come up Friday. The drive from Phoenix to Albuquerque is only supposed to be six and a half hours. If we got to the hotel by the later afternoon we would have plenty of time to settle and get a good night rest to be up very early to see the Hot Air Balloon Festival.

The kids and I started to drive at 9am on Friday but we didn’t end up in our hotel room until 10pm that night. I’ve had some bad drives before but I think this one takes the cake. About 30 minutes into our drive as we were driving through the mountains and the windy roads my oldest got sick. We pulled over and I’m glad for her that was the only time she got sick on the drive. Soon after I didn’t feel good and stayed sick the rest of the way.

The heat and windy roads exacerbated my sickness.  I would drive a little and pull over to rest and we just inched along all day. The whole drive (especially at night) I was pretty nervous because there is a whole lot of nothing in the desert- I felt so alone. However, my car functioned properly and the kids did quite well the whole drive. We stopped in Gallup for a Little Caesar’s Pizza. I had my two oldest run in with some cash and get it because I was too sick to even get a pizza. It was pure relief  (and lots of prayers of gratitude) once we safely got to the hotel.

Once I got everyone settled in bed it was 11pm and Matt had texted that his flight got delayed. He didn’t end up showing up to the hotel until 1am. We had to wake up at 3:45am to leave our hotel by 4:30am so we could make it to the Hot Air Balloon Festival. Matt said his whole flight was people going to the festival and his Uber driver told him not to drive in the morning because the traffic would be horrendous.

We left on time from the hotel Saturday morning and I thought I had brought everyone enough warm clothes. I had our winter jackets, hats, gloves, scarfs etc. There was definitely a lot of traffic so we had to go slow but we made it. It was very very cold in the morning. It was 36 degrees and having just moved from St. Louis I thought we could tough it out. But I think it felt colder because we were living in Phoenix at the time. I had snacks for the kids. We bought our kids hot chocolate…… but it didn’t seem to be enough.

People were still cold. I saw some people also bring blankets and sleeping bags to wrap themselves up on top of their winter clothes. Perhaps that would have pacified everyone more—but we stayed until the Hot Air Balloons were released and then we left soon after. We powered through but I didn’t get to walk around and photograph as much as I would have liked to. That’s OK it was still cool to see and be apart of the crowd that morning. I thought well if the morning is a wash then at least we were planning on going to the evening festival and I had another chance to see the balloons again.

Aside from seeing the masses of balloons that took off we got to see a flyover which is always exciting. We also saw the torches from the Hot Air Balloons all go off at the same time- it was neat to see all of the fire and the flyover concurrently. One of the first balloons that lifted up had a large American Flag as well. I loved seeing the American Flag fly up high- there was a great sense of unity and patriotism at the event. 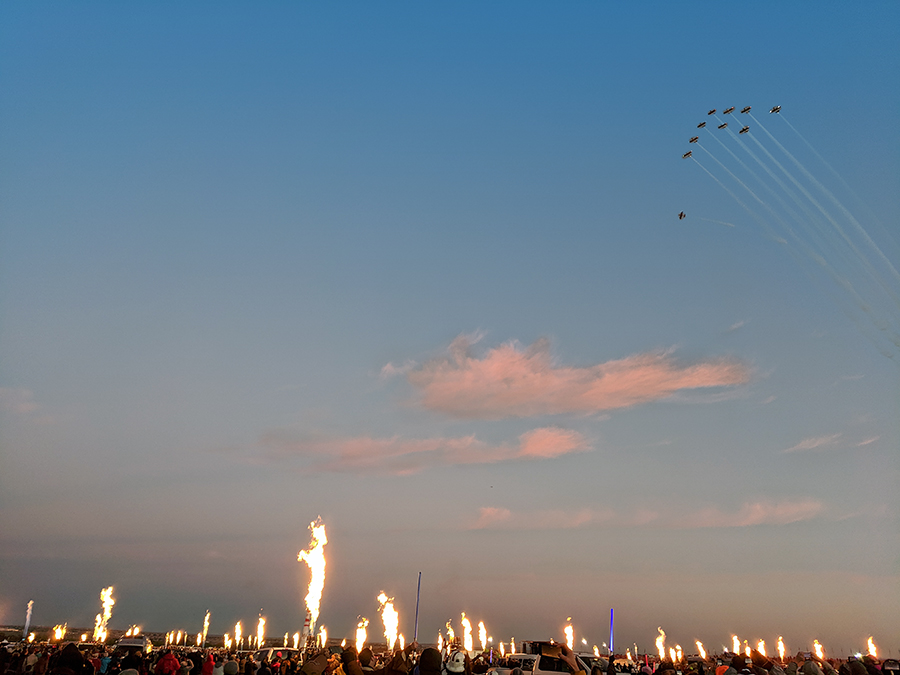 We went back to the hotel got breakfast then we went to the hotel to sleep. Matt and I were still exhausted from our travels the night  before so we passed out and we left the TV on for the kids to watch.

We got up in time for lunch. One of my old college roommates lived in Albuquerque so we met her family for lunch at the Indian Pueblo Cultural Center. After lunch we were planning on going to the Hot Air Balloon Festival for the evening show but realized our car battery died. I think the change in temperature just zapped it. I think the extremely hot summer in Arizona drained our battery a little sooner than we were expecting.

Matt walked to a Napa (luckily just a mile away) and he got there before it closed. The kids and I went to the hotel pool. I was also glad that Matt was with me when the car battery died- If it had died while we were en route to Albuquerque that would have been really stressful. Well we were safe and was able to get a good night’s rest. We debated whether or not to wake up again Sunday morning to try to see the Balloon Festival but decided since we were also driving home on Sunday and we needed a full night’s rest so we would be safe on the road.

Sunday morning we had a great night’s sleep, had breakfast at the hotel (we got to see a couple of balloons fly around the hotel) and then we started with the next day. My roommate Amy recommended a quick hike to see some Petroglyphs- we did the Boca Negra Canyon. We wanted something quick (less than an hour) and that would guarantee us to see lots of petroglyphs. This hike fit the criteria and was perfect. 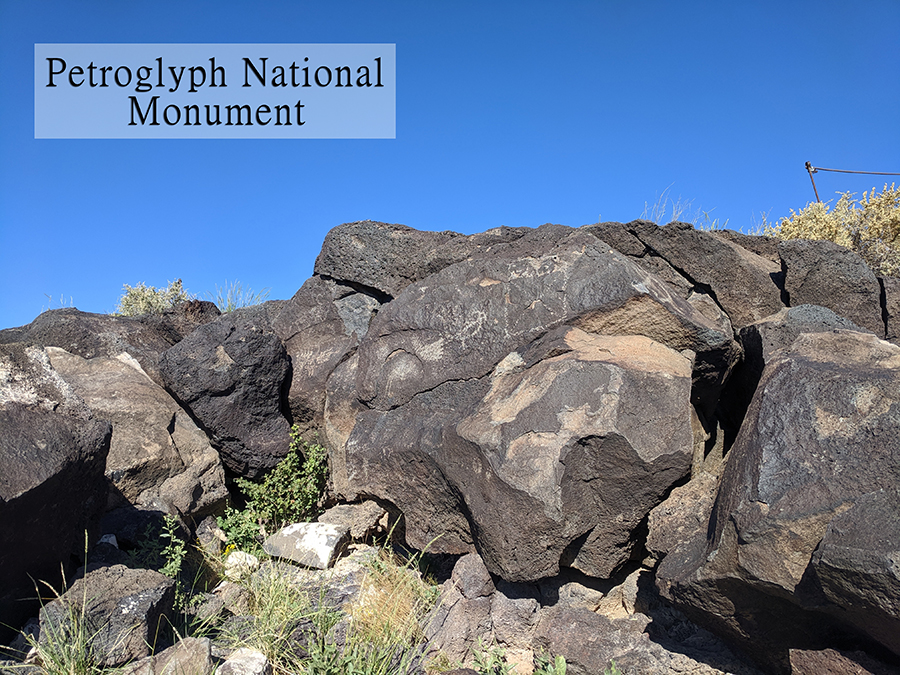 After we did the hike we started our drive home. Matt saw a sign for the Petrified Forest National Park and said we’re so close we should just stop and see it- when else are we going to be back? So we did and it did not disappoint. The scenery was from a different world it was so cool. Arizona has so many different scenes it’s an amazing state. 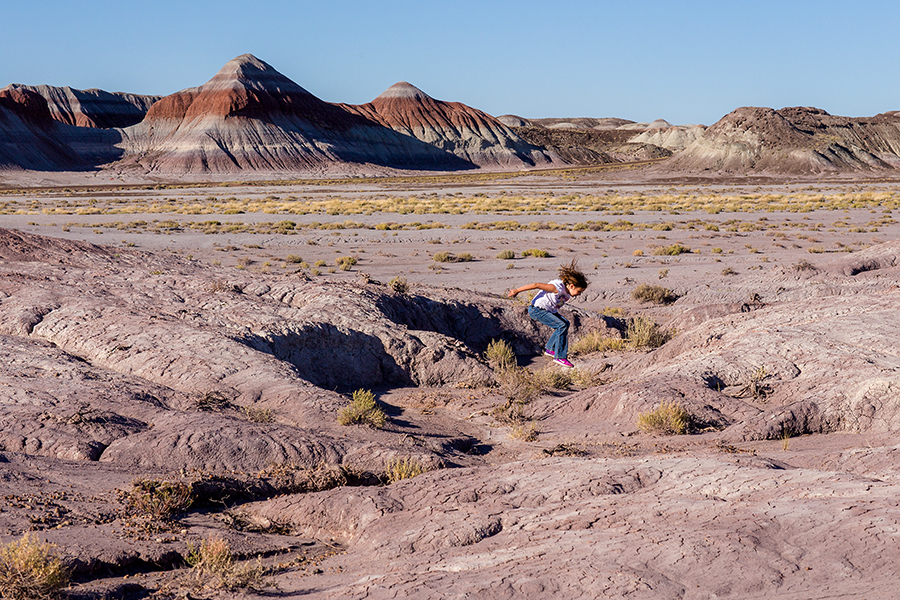 There were certain things I was hoping to do on this trip that I didn’t get to experience but we got to do so many other unexpected things that it was still a fantastic trip. Maybe it’s the people I’m with that also make a great trip. Have you been to Albuquerque or the Petrified Forest National Park? What did you do there? 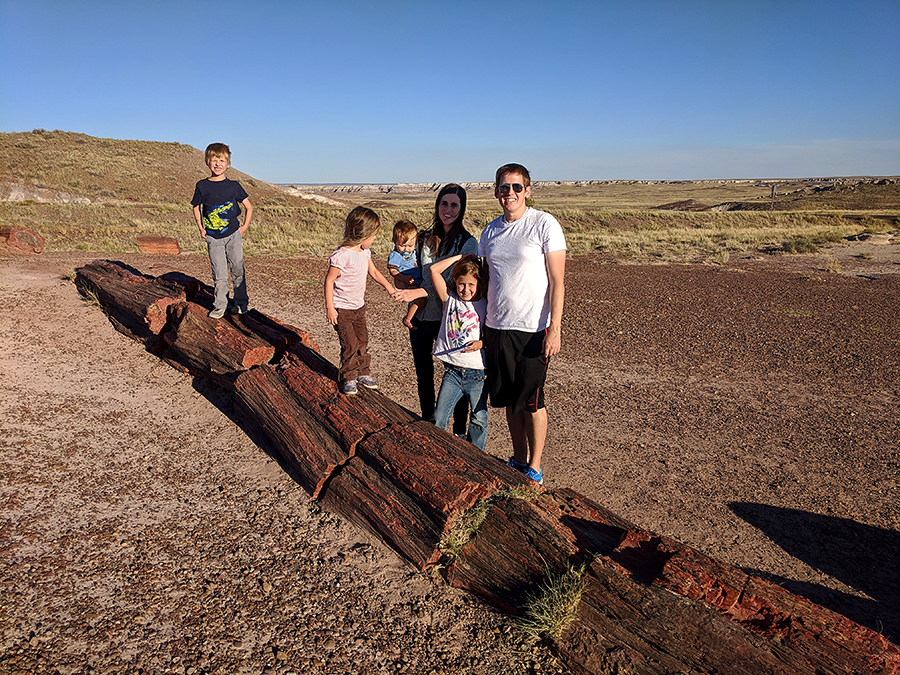 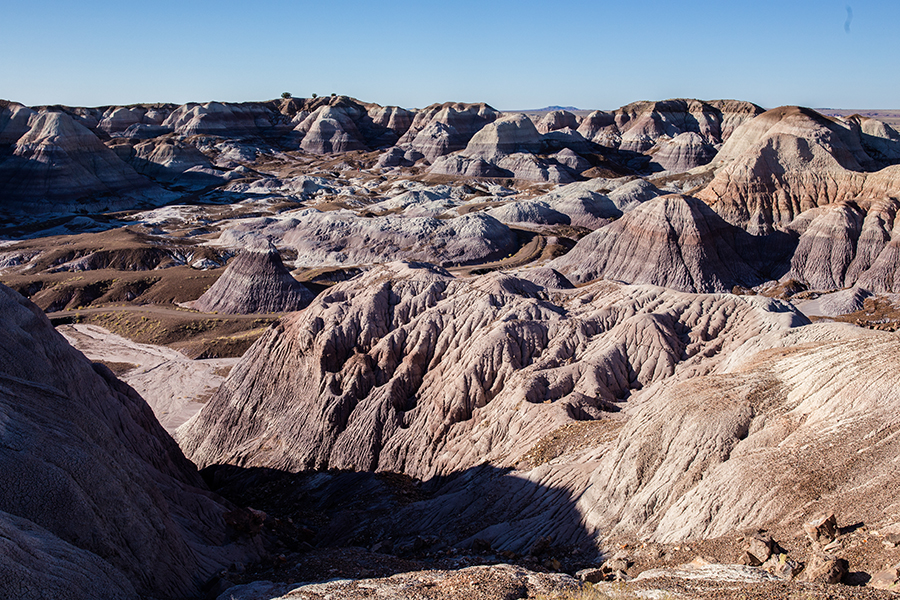