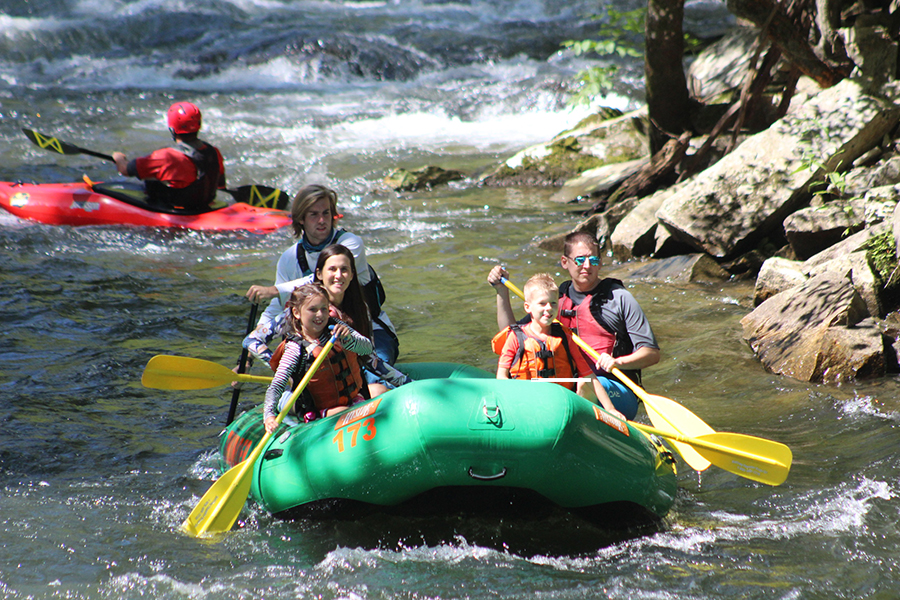 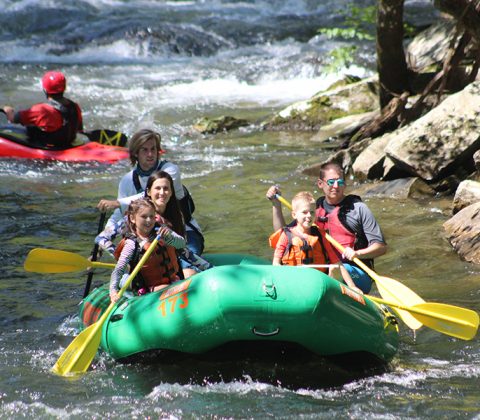 My parents, brothers and I went to the Nantahala River about 20 years ago to go white water rafting. Little did I know my kids first time white water rafting would be on the same river. We tried to describe what white water rafting was to the kids. We said it is a little bit like Kali River Rapids at Disney World. As we were going down the river they kept shouting “this is so fun”. I love that this rafting trip was a lot longer than a ride at Disney. Have you ever been white water rafting? If so, which rivers have you been on? This was the perfect river to start my kids out on. There was only one class three rapid (the last one) and the rest were class I & II.

We were so happy to find out that we could take our seven year old white water rafting. A lot of rivers you have to be older (like 12 or 16). My parents were kind to watch our younger two kids for the day. We chose the Rolling Thunder River Company to do our rafting tour with. We would definitely use them again. Our guide was friendly, knowledgeable and professional. There was an option to do an unguided raft but we got a guide. Even after going down the river I would get a guide again. The guide’s just know how to best get down the river- even though the class of rapids are small I don’t want to get stuck. We saw several unguided rafts need help. 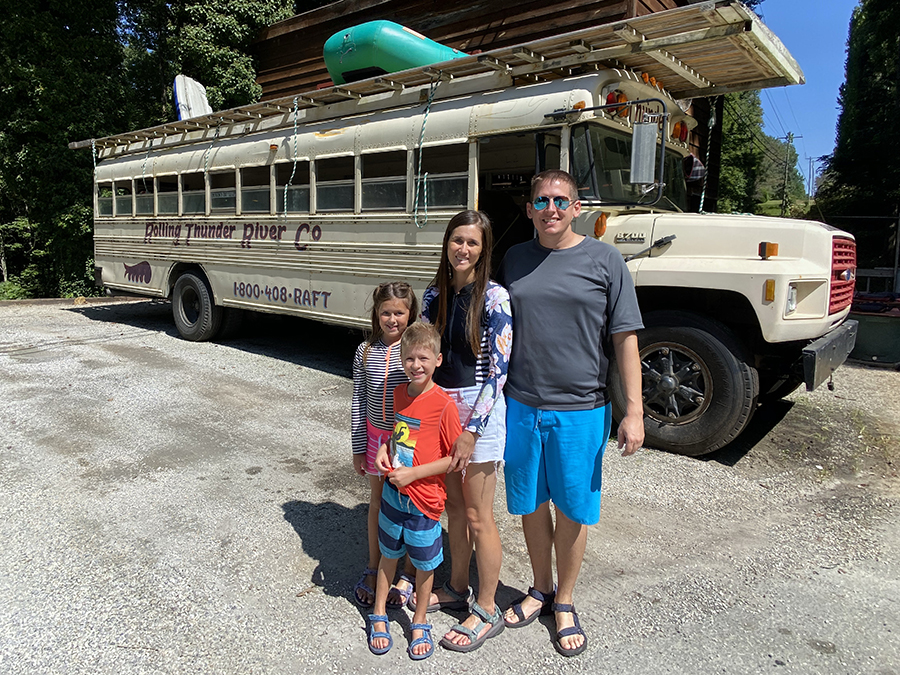 We picked to go white water rafting at noon. If you are going on the Nantahala River, I would definitely recommend choosing to start at noon rather than the earlier morning (I think 9:30/or 10) or the later afternoon time (3pm). We learned that the water is cold 45 degrees! The water is fed from the bottom of a lake by a dam and it’s beautiful, clear and the river has smooth river rocks in them…but it’s quite cold.

We also learned that in Cherokee Nantahala mean’s “land of the noon day sun”. The sun only hits the river in the middle of the day. The rafters in the morning and afternoon are mostly in the shade. The sun feels so good especially if you end up taking a dip into the river. We went the first weekend of September and the temperatures were starting to cool off so the sun felt great.

We went during the Coronavirus pandemic so we brought our masks to wear during check in and on the bus. Of course we brought snacks/water for before and after rafting. Since we were outside we made sure to put on sunscreen before we left for the river. We packed a change of clothes and towels for after the trip so we could have dry clothes to wear for the ride home.

We wore swimsuits. We all had sleeves on our swimsuits for sun protection. My husband had sunglasses with a back attached to it (So it wouldn’t get lost) and if they did get lost they weren’t high end sunglasses. We all wore our Tevas. The shoes are awesome because they stay on and can get wet. Our guide wore dry pants since the water was so cold. He actually had to get in the water to help another raft out. He said since he takes three rafts out a day the pants really help him stay warm. The kids took a little swim during our trip (they were quite cold- again so thankful it was a sunny day).

How Long is the Trip?

We rafted 8 miles of the Nantahala River and the time on the water was about 2 hours. It was a great length.

How Much Does it Cost?

The prices are listed on the website we went on a weekend so it was about $40 a person. We also tipped our guide at the end and paid an additional $40 for the pictures of us on the raft. We will definitely be back. 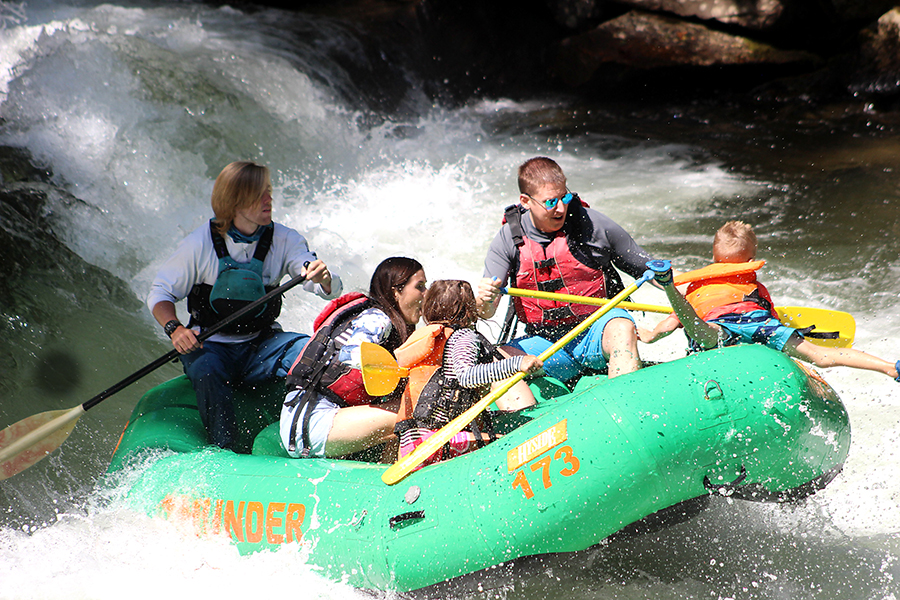 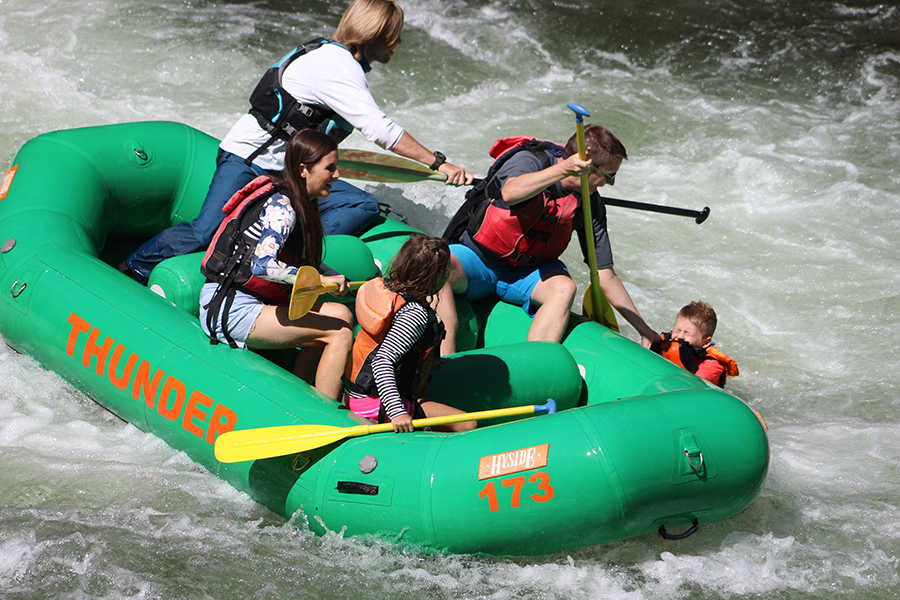