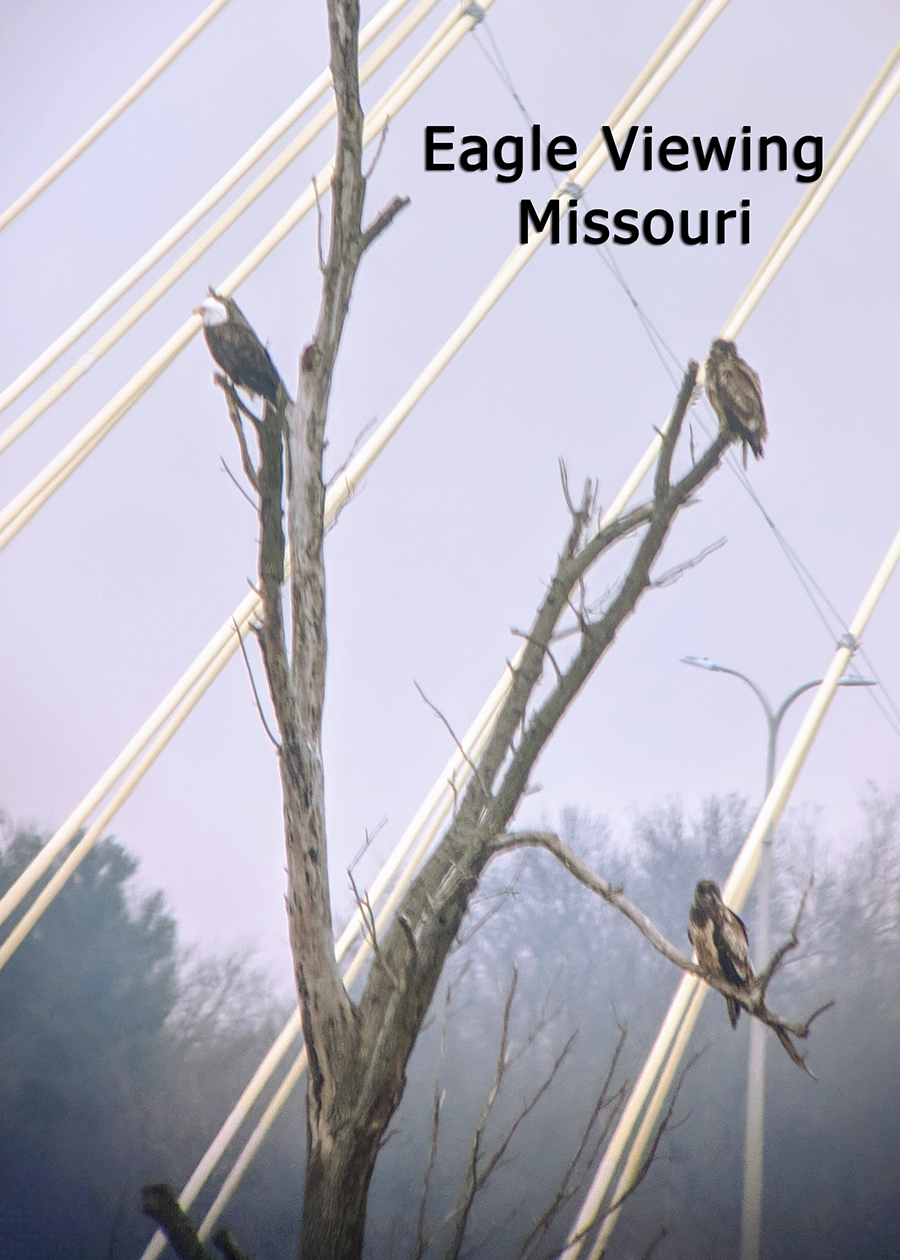 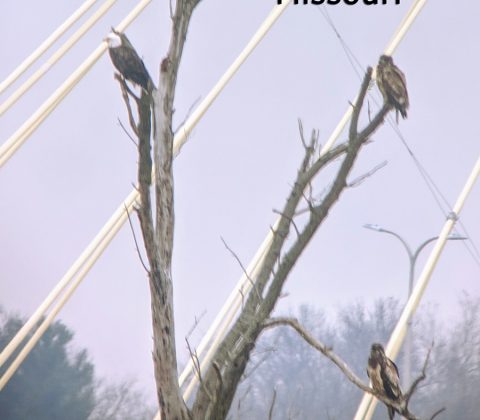 We learned the best time to see bald eagles in Missouri is the winter time. So, we bundled up on a windy, cold day where the highs were in the 30s and headed up to West Alton Missouri. We learned about this area of Missouri because of one of the families at our children’s elementary school. He grew up in St. Louis and told me they go eagle watching every winter and they will see 20-30 a day.  He said they go to the confluence of the river. I learned that’s where the mighty Mississippi and Missouri rivers merge.

We missed the Eagle Sundays and Eagle Ice Festival that the Audubon Center at Riverlands hosts but we were still able to see eagles. We had no idea what to expect and were a little skeptical that we would see an eagle. The Audubon Center had spotting scopes (with step stools for the kids) that were free to use. 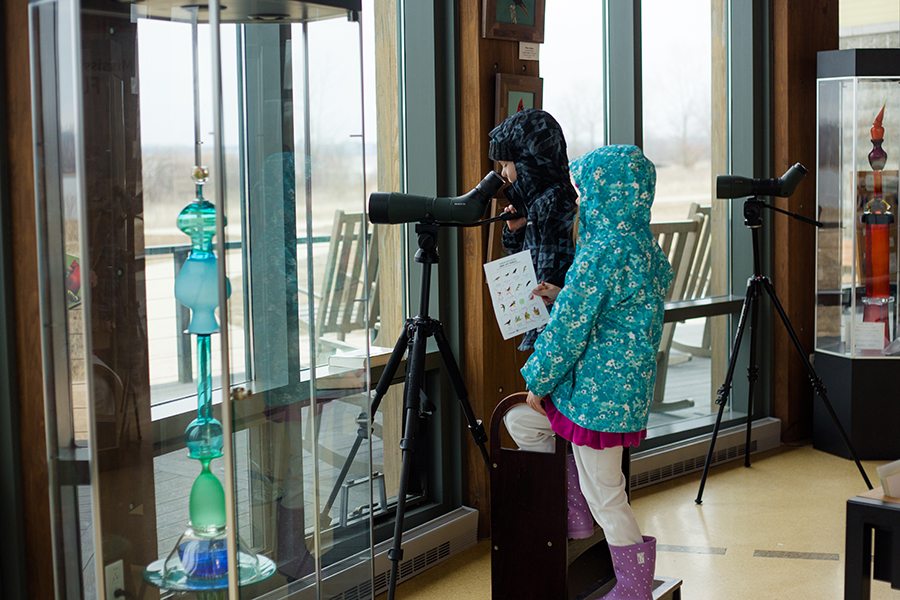 Those that worked in the center were so friendly and eager to show us where the eagles were. We saw about 6-8 Eagles (and Bald Eagles that day). We were thrilled. Matt and I are both confident that if we spent more time at the Audubon Center we would have seen more. We were grateful the Audubon Center is indoors and heated. Matt used his phone’s camera to take a picture of the eagles through the spotting scope. He has some skills because I tried doing that with my phone and got zero usable photos.
The employees said they see about 30-60 a day flying up and down the Mississippi River. As with most wildlife early mornings and evenings are the best time to view the most number of animals. We meandered outside a little bit to walk on the board walk to look for more Eagles. Another positive was West Alton was only 30 minutes from St. Louis. 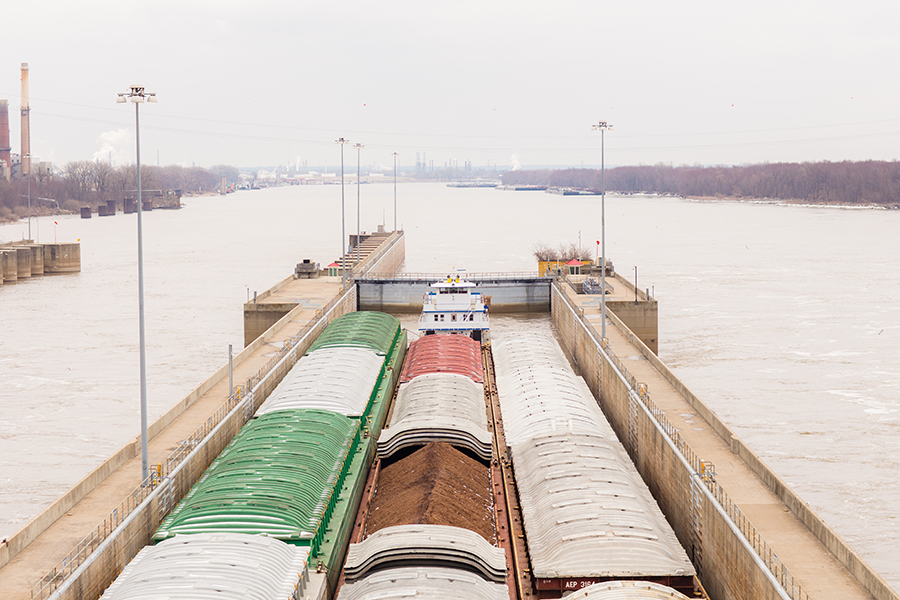 After we visited the Audubon Center we went to Alton, Illinois and and visited the National Great River’s Museum. This museum is free and if you time your visit well you can take a free walking tour on top of the lock/dam system over the Mississippi River. Again the guide was so kind and enthusiastic about what he did it made the tour so enjoyable. It was neat to watch a boat go through the locks and go further north. We could see an eagle’s nest from the museum. The guide told us that every year some of the same patron’s come to visit in the winter time to view eagles flying and fishing in the River. He said one of the patrons the day before we came was able to photograph an eagle swooping into the water to catch a fish.
We went on President’s Day (it seemed like a perfect thing to do for the Holiday). The best times of the year to see them is late December to early March. All of the events put on by the Audubon Center, Alton Visitor Center and National Great Rivers Museum were in January and early February. It’s great to get outdoors even in the winter time in St Louis.
We had never seen bald eagles before in the wild and it was truly spectacular.